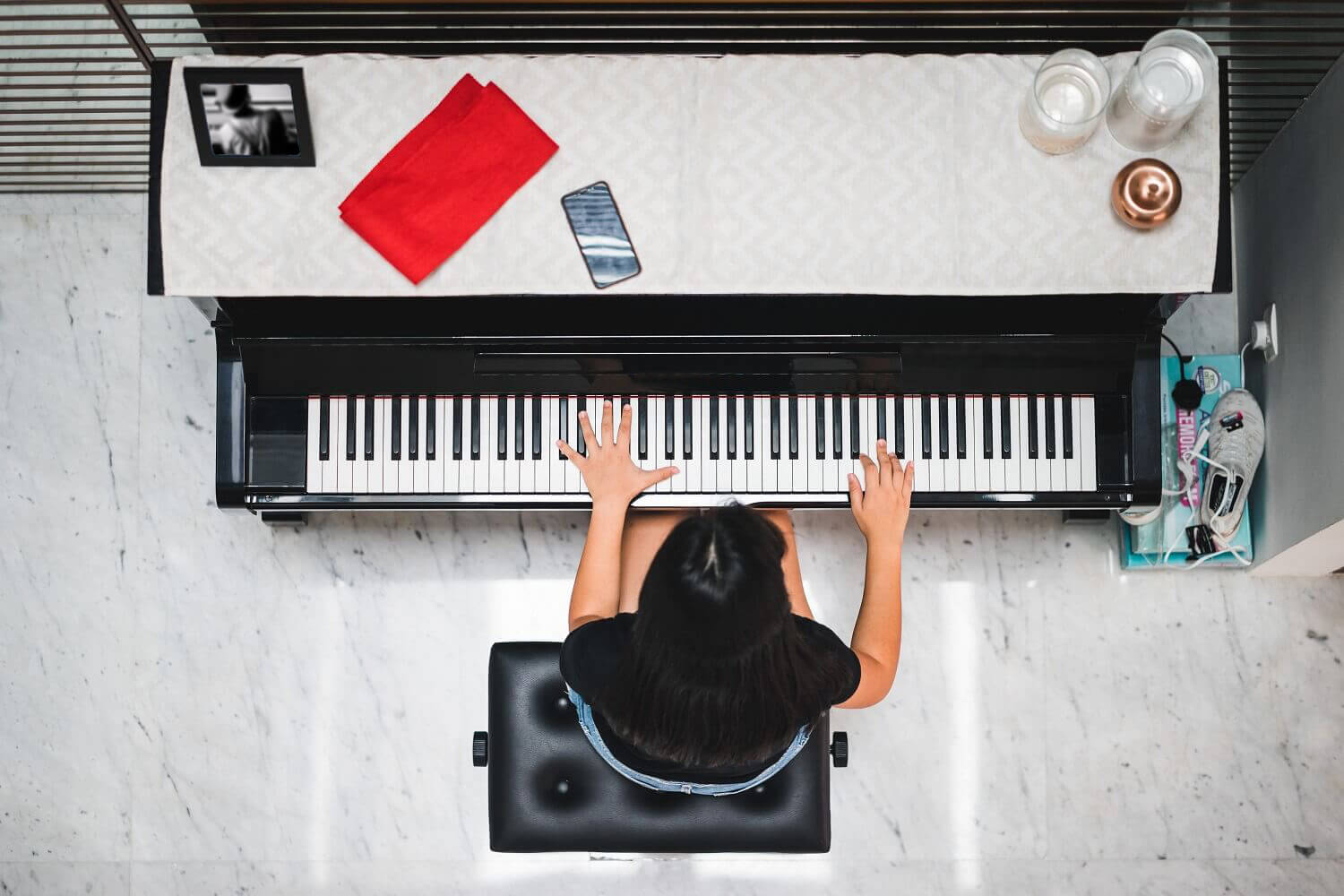 Doesn’t the thought of piano blues scales just sound exciting? No? That’s ok, we understand. They are hard to show and teach without being a little bland and detailed. But it shouldn’t be that way. There are fun aspects to theory and there are some great scales to learn. Especially the blues scales, they are so awesome that they will inspire you to practice and play more!

Once you understand these simple but powerful piano blues scales, it will even change how you listen to music. They are not just great scales for the blues; they are part of the foundation of jazz, rock, pop, R&B, soul, and many more styles.

And the best part of all, is that piano blues scales are not difficult to grasp!

A Quick Primer on Music Scales

Before we jump into specific piano blues scales, let’s take another look at the basics. First let’s remember our best musical helper – the Circle of Fifths:

There is a ton of info packed into that graphic, and it’s ok to not understand it all at first. But you should print that image out and tape it right beside your piano!

Multiple ancient civilizations discovered and used the pentatonic scale, and as the prefix “penta” suggests there are five notes in it. While we won’t dive too deep, there are fundamental mathematical reasons these five notes appeal to our ears. To this day pentatonic scales are used heavily in many genres of music.

If we start at the top of the Circle of Fifths, at the C and then counting five notes; we will have the basic C major pentatonic scale.

Now, while the pentatonic scale is great and has stood the test of time, it limits us on our ability to express ourselves musically. In western music the fourth and the seventh were added, giving us the diatonic scales that we know today.

The easiest and most common heptatonic scale is the C major scale:

There are also hexatonic scales (six notes), in fact that is how we get the blues scale by adding a sixth note.

But first we need to discuss the difference between the major and minor scales.

What Does Major and Minor Mean?

This is the same way we figure out major and minor scales. Major scales have all the tones you would expect of the key with the formula W-W-H-W-W-W-H. W stands for a whole step and H stands for a half step. Each piano key is a half-step apart. If we start with C and use this formula, we get the C D E F G A B C as above.

You can use this formula to find the major scale notes of any key. Start with G and go W-W-H-W-W-W-H and you will have G A B C D E F# G.

There are a few different minor scales, the most popular being the natural minor. It has the formula W-H-W-W-H-W-W. So now start at C and count your whole and half steps to get C D Eb F G Ab Bb C. Another way to look at the formula is like this; 1 2 b3 4 5 b6 b7:

If we want to go back and use just a five note C minor pentatonic scale, we use the formula 1 b3 4 5 b7 like so:

Blue Notes and the Blues Scales

Now step back and take a breath, music theory can be overwhelming at times especially when there are multiple ways to find an answer. And sometimes things just simply don’t make sense, for example blues scales aren’t technically scales! Ha! What you are doing is using “blue notes” in the scales above.

A “blue note” is a note that is played that doesn’t belong in a standard scale. It adds expression and feeling by playing notes that are normally out of place. Blue notes can be full semitones or even microtonal differences. In western music the main blue notes are the flattened third, flattened fifth, and flattened seventh.

By adding these blue notes to the scales above we get what are known as Blues Scales. The most popular blues scale you will see are pentatonic scales with an added b5 (flattened fifth) blue note (thus making it hexatonic as mentioned above). So your common C Blues Scale is:

As you can see this is a b5/#4 added to a C minor pentatonic scale. This will be the most common piano blues scale you use. If you want to play it in F? We look at the Circle of Fifths or use the formula to get the F minor pentatonic; F Ab Bb C Eb. To get the common F minor blues scale we add the b5/#4 and get; F Ab Bb B C Eb.

This will work for every single key! Don’t look the other keys up… try and use the formulas above! There is nothing wrong with looking up a specific piano blues scale when you need it, online or in a reference book. However you should first make sure you understand how they are made.

Now there are also heptatonic and even nonatonic (nine notes) blues scales, but we will save that for another day. As usual they will still rely on b3, b5, and b7 blue notes. It’s not that complicated, you will just be using the hexatonic ones above the most.

Here you can get all previously discussed Piano Blues scales as a PDF to print and practice.

Now you may wonder why not just show you the major and minor blues scales immediately, why start with pentatonic and heptatonic scales? The reason is you will often be using blue notes and their “scales” over major chord progressions. It is that tension that leads to some great music. Historically this tension was discovered thanks to early stringed instruments and the bending of notes.

Various cultures, especially those out of Africa, mixed bent blue notes with syncopated rhythms (off the main beat) to create what we call the blues, jazz, rock, funk, and basically all the music that makes you want to dance and move. If you want to play any of those genres you need to practice your blues scales. Don’t just play them in ascending and descending order… improvise!

Once you learn the scales you can then start applying them to chords and advancing from there. The blues are full of seventh chords which we make by using the formula 1 3 5 b7 (so a C7 is C E G Bb). A standard blues progression is something like C7-F7-G7-C. And classic rock is filled with b7’s and b3’s, a common progression being C-Bb-F-C or C-Eb-Bb-C.

There are so many genres that use blue notes that we could fill a book. But now that you know the basics of piano blues scales, you will learn to recognize them in your sheet music. You will start to notice where songs throw in b3, b5, and b7 notes; that don’t technically belong, but sound great! It won’t happen overnight, but with practice you will soon be playing many genres thanks to the basic blues scales!