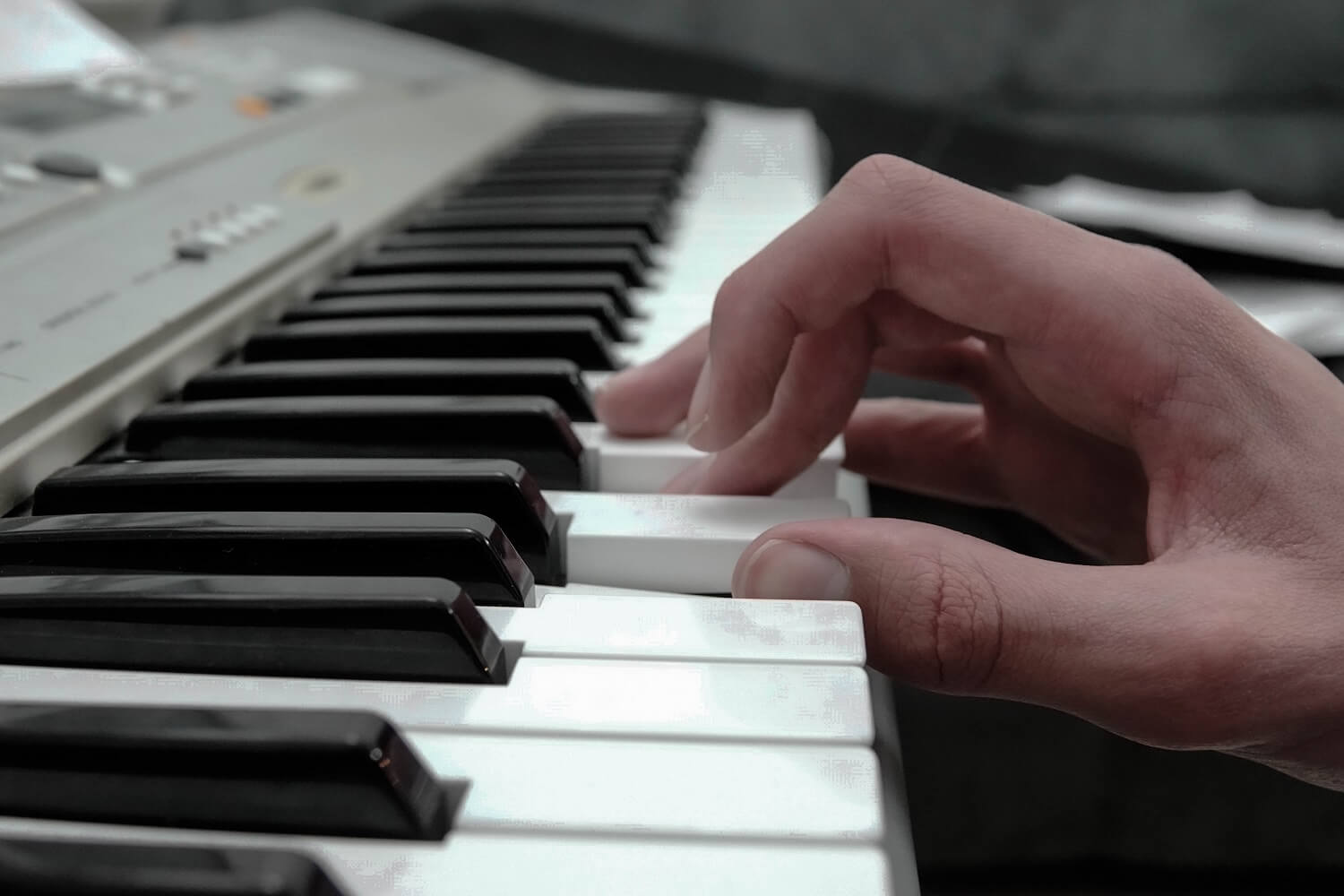 We often talk about how specific chords and progressions are used in each genre. The I-IV-V of rock, the pop I-vi-V-IV, and of course the jazz ii-V-I are some that come to mind. So how is it if everyone is using these progressions all songs don’t sound the same? Well to stand apart you have to make little changes in those progressions and one of the best ways is to use common piano chord alterations.

The basic definition of any chord that is altered is said to have non-diatonic notes within it. So if we look at the common C major scale we have;

If the song is in the key of C, then any notes added beyond that scale will usually make an altered chord. Remember that the first or root note is the tonic, and the fifth note is known as the dominant.

Using that scale above we can find all the chords we need in the key of C. The formula for C major is the notes 1, 3, and 5 (C-E-G). The 1, 3, and 5 are stacked triads, and if we add another triad we get 7th notes. The most common is the dominant seventh otherwise known as C7 with the formula 1-3-5-b7 or the notes C-E-G-Bb. Of course, we can change or alter these seventh chords by raising or lowering the 3, 5, and 7. Here are the chords we can build;

…by lowering the fifth a half step.

… by raising the fifth a half step.

… by lowering the third and fifth both a half step we get a C diminished (C dim).

… by lowering third and raising a fifth we get C augmented (C aug).

We can continue past the seventh note to get extended chords like the 9th, 11th, 13th and more. You just extend the scale;

The second and ninth note is the D. It is very common in jazz, funk, and boogie woogie to see these extended chords. Rock and pop music use them also, but usually not as much and mostly dominant sevenths. And just like the chords above they have different variations depending on if the 3, 5, or 7notes are flattened or raised.

An extended chord will always have notes that belong in the key and scale you are playing. While altered chords are those with notes out of the scale. In jazz this is mostly done with the seventh chords shown above. And they are called dominant because that 7th triad is built from the 5th note (or the dominant).

Technically any chord that uses other chromatic notes is going to be an altered chord, but the main ones to know in jazz are the altered dominant. These all depend on whether you raise or lower the 5 and the 9 is also included. Make sure to play these chords as you read to get an idea of how different they sound. This can all seem complicated, but once you realize we are moving in half-step changes, it’s no big deal.

…by adding a raised ninth to a C7.

… by adding a lowered fifth and lowered ninth.

You will also see altered chords like #11 and b13. And of course there are times when we even alter the root or the third. But most of the time in jazz, the notes above will be the ones used when talking about chord alterations.

Practical Use Of Altered Chords

Sometimes sheet music will not even tell you which altered dominant version to use! They leave it up to the artist’s discretion. And the whole point of these chords is to add tension that needs to be resolved. If you are playing in a band with others then some will be playing the root notes while others are playing the extended/altered, the work can be spread out. But if you are by yourself on the piano, it is all up to you to play these voicings.

And those altered dominant chords above may be a little much at the moment, if you are a beginner you may want to stick with simple altered chords. For example take the common I-IV-V or C-F-G progression and alter the F major to F minor. It sounds a little off right? That is the main problem with altered chords, finding a way to make chromatic notes work in your chords. It is up to you and your ears! As mentioned above this is used in pop and rock. It is there and important to know, but it’s not the same as a bebop jazz player… they need to know their altered chords inside and out!

One of the best examples of an altered chord is the dominant 7th sharp 9th or 7#9. This chord is known as the Jimi Hendrix chord, because he loved it so much that when we hear it, we think of him! Granted it isn’t as obvious when played on a piano vs an electric guitar. It won’t always be easy to hear altered chord examples, especially with the more notes you add. The key is to know when and how to use them, which will come with experience. Now that you know the formulas above you will start spotting common piano chord alterations in your music.

This is why it is so important to know your scales, that way you can know how to alter them! So when you are writing a new song or improvising you have new directions to go in. You aren’t just stuck in the same notes and progressions, altering a chord allows you to branch out and explore. Some of it will sound terrible, but when you add chromatic tones at just the right time you can really hit a sweet spot and make your music unique!