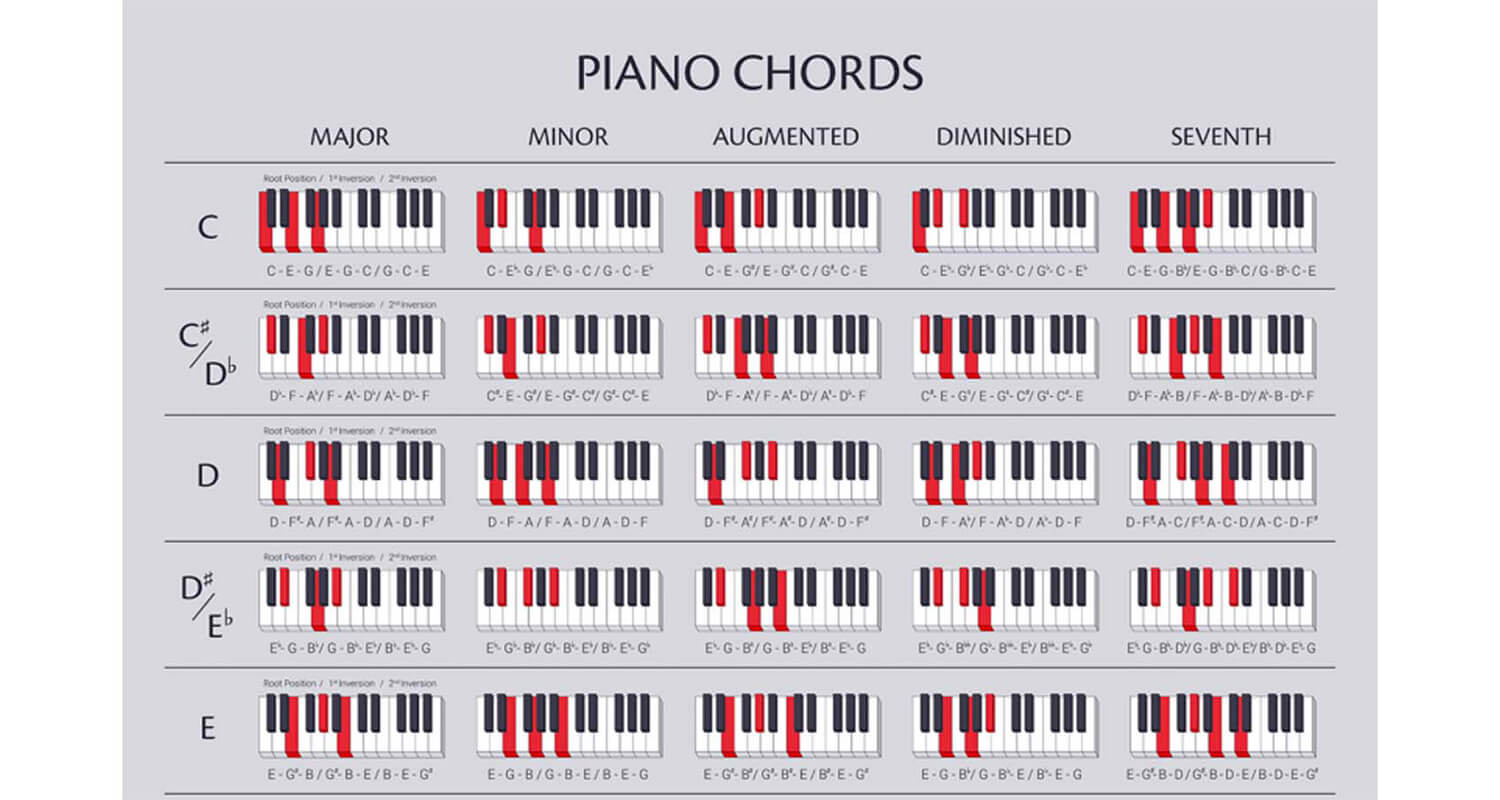 Chords are an essence of music as they define the harmonies. What looks complicated first for beginners follows a pattern. And as you dive deeper into your music-making knowing about it will make you a complete piano player. This piano chord chart shows you all chords – from the most common ones to the tricky augmented and diminished ones – through all harmonies. We’ve also included a free downloadable PDF poster with chord charts. If possible print it out and put it right beside your piano or keyboard.

Each image on the OKTAV chord chart is roughly two octaves on the piano starting at the C note. And it is important to note that one key to the next is a half-step or semitone difference. If you look down every column you will see the chord qualities all have the same distances in tones.

Follow the red to know exactly which notes are played on each chord. All 12 keys are represented, and a great review along with this poster is your Circle of Fifths. That will help remind you why each key has its specific sharps or flats.

Along with the root position the image also shows you the first and second inversion, which we will explain below. The poster is aimed at making it easy to play a chord without a deeper explanation. But we promise with just a little music theory you will unlock the real power of these chords.

Music is made up of patterns and formulas, and once you learn them you will eventually have an epiphany where it all falls in place! To get to that point of understanding you start with the basics and of course practice!

The most common scale used is the major, and in the key of C that is the simple CDEFGABC. All major scales have the formula W-W-H-W-W-W-H, the H being a semitone and the W two semitones or a whole tone. Even if you don’t have your Circle of Fifths that formula will help find all major scales.

Now the major chord formula is the root or first note, third, and fifth. So the 1, 3, and 5 in the C major scale is C-E-G. For another example the Ab major would be Ab-C-Eb. Look at each major piano chord and you will see they all follow this formula.

Now an inversion is when we change that order. A root position C major is C-E-G, if we order it E-G-C it is still a C major but the first inversion. The second inversion is if we order the C major as G-C-E.

Major chords are very uplifting and strong while minor chords have a deeper and sometimes sad feel. Most popular modern music is a mix of both of them. By knowing the first two columns of this poster you will be able to play thousands of songs.

So far we have expressed chord qualities as major or minor, when we raise the note in the 5 position we get an augmented chord. The formula being 1, 3, 5# which means a G augmented (notated G+ or Gaug) is G-B-D#.

Raising that fifth up by one semitone creates a lot of tension. Give an augmented chord a play and you will see. It is used sparingly as a way to build up to a bigger resolution.

If we use the formula 1, b3, and b5 we get the diminished or dim chord. With its tritone interval it has a lot of dissonance to its overall texture. The diminished is also used in a similar way as the augmented, again it is a very unstable chord that begs to be resolved.

The rest of our chords are built on these same underlying formulas. A seventh chord adds the 7th note of the scale. For this poster we are using the most common or dominant seventh which has the formula 1, 3, 5, and b7 meaning a C7 uses the notes C-E-G-Bb.

The dominant seventh is a staple of blues, jazz, pop, and rock. Try playing these major chords in this order C-F-G. Now try C-F-G7, notice the difference when that flat 7th note is added to it.

Once you have these chords down it will be no problem to figure out more! A Cmaj7 is 1, 3, 5, 7 so you know it will have a B instead of a Bb. Chord construction is really that simple. Memorize your formulas and you will be set!

How to Use These Chords

Now that we know the basics of the chords on this poster it is time to start practicing them more. At first go through the easier keys like C and as you feel more comfortable try the harder ones.

The piano sheet music you will be playing will not always have full chords in each measure. Often they are broken up so practice your arpeggios. Instead of playing C-E-G as a full chord play the notes one at a time repeatedly. That is an arpeggio and it is a great way to help memorize the notes of each chord.

And as you are playing sheet music keep an eye on the notes in each measure so you know what rough chord you are playing in. Another great way to practice is to pick a key and chord progression and just play. If you have songwriting dreams at your piano that is the best way to come up with new ideas!

With your new piano chord knowledge and this poster you will have a running start at your goal of learning to play the piano. Each time you play a chord pay attention to the notes, formulas, and most of how they all sound.

Keep practicing and before you know it you will be a master of piano chords!