5 Devices that Make You a Better Piano Player 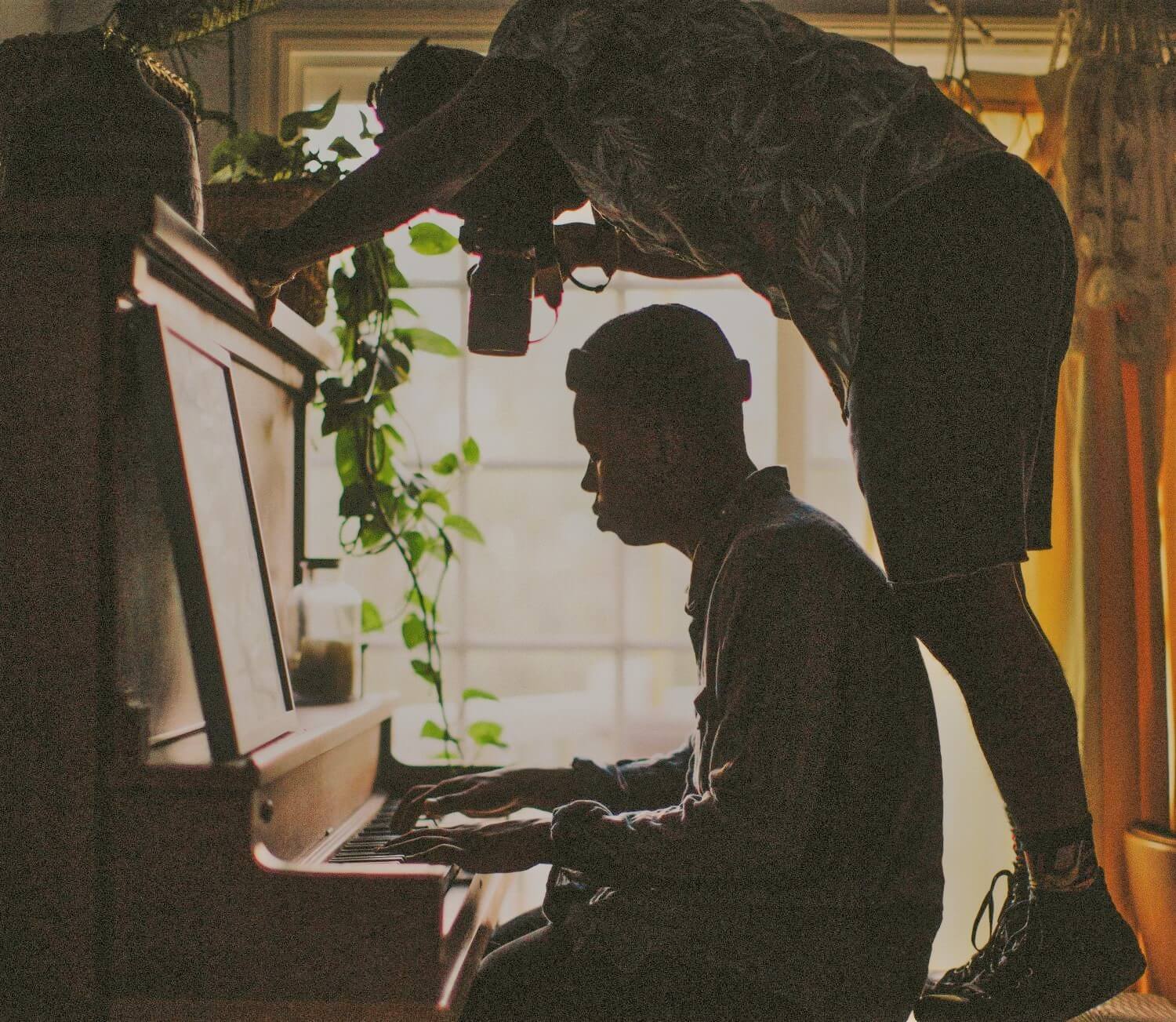 When was the last time you plucked a feather from a goose, sharpened it with a pen knife and dipped it into ink to write a letter? – What, you’ve never done that because sending an e-mail gets the job done faster and more conveniently? Well, the same applies to playing the piano! There‘s plenty of new technology – like OKTAV – around that is fun and can help you become a better musician. You‘ll still have to practice your scales, though.

Here´s our list of five tools that can help make your life as an instrumentalist more productive:

Back in the old days you either stopped playing the moment you stopped having lessons, or you played the same old songs over and over until your neighbours begged you to stop. For sheet music, you would have had to haunt the stores – often second-hand, dusty, mildewed and scribbled-upon (or you traded hand-written arrangements with fellow musicians and had to decipher them like an egyptologist figuring out hieroglyphs). If only you could have had something like OKTAV’s subscription sheet music service:

“If only I had a sheet music library with thousands of scores and a broad choice of genres! If only I could play as much as I want without paying extra for each new piece! And if only I could have all my scores stored neatly on a slim electronic device!”

We heard you, loud and clear! That’s why we created OKTAV in 2018, offering more than 20,000 pieces of piano sheet music from every genre and for every skill level, with a no-hidden-costs flat rate that gives you unlimited access to as much music as you want, lets you print out your favourite scores and suggests new pieces to try, based on your preferences. We’re like Netflix for sheet music, really. And because there’s much less paper involved than in former times, we help you save trees. Trees are good for our climate, so it’s best not to chop them. Here’s what you could use instead:

The beauty of OKTAV is: it works on any device. No downloading, no installation, just log in and you’re good to go. For maximum joy, you may want to consider using OKTAV on the following devices:

The Apple iPad Pro with its 12.9 inch screen is an excellent device to use for much more than just reading music. Lots of OKTAV users use their iPad or a similar tablet with a large display to read their sheet music. This particular model comes with a four-speaker audio set-up and five studio-quality microphones, a stylus is also available.

If you prefer a more budget-friendly option, consider the Amazon Fire HD 10, available from Amazon. Its display is 10 inches wide, so slightly smaller than an iPad Pro screen, but works very well for a fraction of the latter’s price.

If you’d like to splurge the PadMu 3 Lumi is a beautiful e-ink tablet designed especially for musicians – think kindle, but for sheet music. Optionally, start by investing in just one of the 13.3-inch screens, then later save up to buy a second one. They interconnect! Since you view two pages at once, you have to turn them less often. Stylus included. A more budget-friendly e-ink reader would be the Pocketbook InkPad X with a 10.3-inch screen. You can access OKTAV on both devices using their browsers.

Classically trained musicians used to have to rely on other people breathing down their necks turning their pages at piano recitals. Concentrating on one’s own musical abilities was hard enough, but in addition they had worry about someone else’s attention span – was that a suppressed yawn? Jazz and pop pianists, on the other hand, could only dream of a human page turner. It was either learn everything by heart, shrink six pages to fit on one, or become split-second page-turners. Modern-day musicians of all genres can gloriously rely on bluetooth pedals:

AirTurn Duo page turner: Is pedal envy a thing? We’re not sure, but in any way, now you can have two extra pedals that allow you to turn pages forward and back at your own pace! This page turner works with bluetooth technology – no cables to trip you up. Charge it with a USB connection and use it for other stuff too, like changing presentation slides or browsing the web. Should anyone ever develop a bluetooth toaster, we fully expect it to connect with your Air Turn to give you full remote control over browning your toast!

The iRig Blueturn works in a similar way as the AirTurn Duo but is a bit simpler in design. The tiny device connects via Bluetooth, works with your iPhone, Ipad, Mac and Android device. Use as a foot pedal, or install on the piano to use as a hand switch.

Mozart never used a metronome. How we know that? It was only invented in 1815, quite a few years after his death. Ludwig van Beethoven – among other musicians – wanted to have one made, so instrument builder Johann Nepomuk Mälzel constructed a prototype. Ever since then metronomes have been dictating the timing for millions of musicians. No one would dispute they are one of the most useful inventions in music history.

However, many aspiring musicians felt there must be a better way than having the obnoxious click-clack stuck in their brain for hours after practice or having the mechanics slow down and stop mid-piece, forcing you to wind them up and start all over. Enter the age of digital metronomes: Soundbrenner wearable metronome!

It looks like a wrist watch, but sends out powerful vibrations on each beat! No irritating clicking – just feel the beat on your skin, like a strong pulse. Also, unlike its noisy predecessor, it can discreetly be used live on stage! It will synchronize with the other band members’ wearable metronomes and you’ll presumably be in sync like never before. If you’d rather have free wrists while playing, you can strap it to other body parts (Soundbrenner suggests around your upper arm, ankle or chest).

Of course there’s the Soundbrenner metronome app to go with it, and  – Soundbrenner being a friendly company – you can use it even if you don’t own the wrist device. The app has a ton of useful features including a tapping pad. It does offer noisy acoustic beats if you want them, but also a visual-only mode. Changing the speed is intuitive: swipe left for slower, right for faster.

If you just duck-face for a selfie in front of the piano, that‘s vanity. Recording yourself while playing is smart, not vain. If you like what you’ve recorded, you can always share it. If you hate what you hear you can analyze it, use it to improve your performance and get over it (you could also try sharing your fails – people will probably love you for it!). Chances are, you’ll hear or see all sorts of things that escaped your notice while you were playing (and we mean musically, although we might point out your nails were dirty and you had a funny way of wrinkling your nose!).

Make recording yourself part of your daily practice routine and see if your playing doesn’t improve quickly! Just start out using your phone or iPad, or go directly into your computer using Garageband or Pro Tools. Don’t worry, you don’t really sound the way your recording sounds via your phone – you sound way better! A good microphone will let you hear just how much better:

The Shure SM57 is a sturdy allrounder microphone for voice as well as instruments. We bet every recording studio on this planet owns at least one! It records or amplifies the sound of everything you point it at, from your canary bird to US presidents (we’re not kidding you – this is the official White House microphone!).

Go video! If you want to take the idea of recording your progress one step further, invest in a good camera and stand. Without those two things it’s hard to even film your hands hovering over the keyboard. As a good budget-friendly camera we suggest the Jelly Comb W15. It can film up to 1080P, has autofocus and built-in lighting and microphone (you might consider using an external mic for recording your stage performance, but for practice its inbuilt mic will do nicely).

At OKTAV, we are musicians just like you are. We believe in our instruments’ organic sound and feel. We believe in perfecting our technique and emotional expression. We believe in embracing technology as a way of becoming even better pianists. Most of all we believe in giving you everything you could want from an online sheet music service. All this, and – fun! We believe sitting down in front of a piano should be fun.